Have you ever found yourself stuck? Like, you just don’t know which way to go? Like life is just knocking us over and over?

Do you feel unloved at times?

Turn to God. He will show you the right way to go. He will be your guiding light.

Look to Him always. He will never fail you.

He loves you so much. He longs to have a relationship with you.

But God demonstrates his own love for us in this: While we were still sinners, Christ died for us.

His love is unconditional.

Simply put, he loves us with a love that overcomes our failures.

When I was 17, I started having panic attacks. To this day, I have no idea where they came from. Nothing significant had occurred in my life. They just showed up. Out of nowhere.

One night, as I was trying to get to sleep, I had a major panic attack. It was so bad that my hands seized into a fist, my heart was racing super fast and I literally thought I was dying. My mom tried her level best to unclench my fists but she couldn’t. It was miserable. My mom told me later that when she put her hand over my heart, it felt like a heard of horses galloping.

Mom took me to an urgent care where the doctor put me on Xanax, which made my panic attacks worse. So they switched to Klonopin. I was on that for years and for the most part, it kept my panic attacks at bay. I would still have some but they weren’t nearly as bad.

Well, eventually, I had to stop taking the Klonopin because I no longer had insurance and so I couldn’t afford it. I started going to a clinic in my city that helps those who are uninsured and they put me on Lexapro. That stopped working so my doctor put me on Celexa which I am still on. And it works wonders. I still have minor setbacks but they are nowhere NEAR as bad as that one night when I was 17.

But you know what the best medicine is? God’s Word. I find that when I’m feeling even remotely anxious, I just turn to God’s Word and look up Scripture on anxiety.

Do not be anxious about anything but in every situation by prayer and petition, with thanksgiving, present your requests to God. And the peace of God, which transcends all understanding will guard your hearts and your minds in Christ Jesus.

Some people believe that medications are not needed and that just by having enough faith is enough. I’m sorry, but I don’t believe this. When a person has a panic disorder or suffers from depression, there is a chemical imbalance taking place in the brain. In some cases, medication is a necessity, as in my case. I tried to wean myself off my medications once and it was awful.

Some more Scripture you can read if you are feeling anxious:

But seek first the kingdom of God and his righteousness, and all these things will be added to you. Therefore do not worry about tomorrow, for tomorrow will worry about itself. Each day has enough trouble of its own.
Matthew 6:33-34

For I know the plans I have for you,” declares the LORD, “plans to prosper you and not to harm you, plans to give you hope and a future.|
Jeremiah 29:11

Cast all your anxiety on him because he cares for you.
1 Peter 5:7

We live in an anxiety-driven world. But God’s Word promises us that as His children, one day we will live in a peace-filled world! One day He is coming back for us and all of life’s worries will be gone! Can I get an AMEN!

Have you ever had a panic attack? What did it feel like to you? 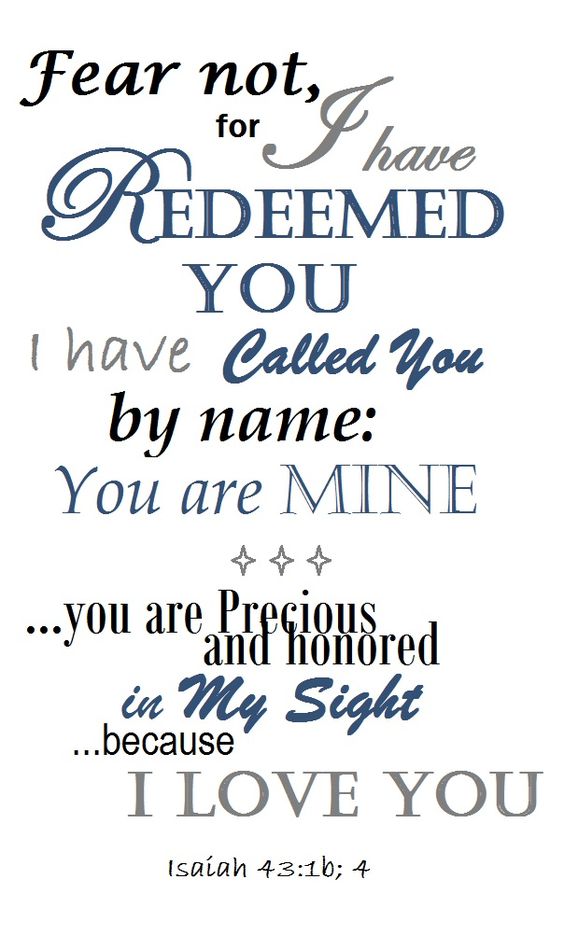 I’ll never fully understand God’s love for me. I fail him time and time again. But He continually pours out His grace upon me. Little ole me. I don’t deserve it.

None of us do. Yet he longs to have a relationship with us. He loves us with an agape love. An unconditional love. That love will never change.

He longs for his children to come to Him. He won’t force you by any means. He gives you the choice whether or not to choose Him.

A while back I opened up and posted a poem I had written. I feel very vulnerable when I share my writings because I really don’t think they are that good. But God pressed upon me to post a poem and so here you go!

My mind just can’t comprehend
the love you have for me.
I try so hard but fail
Loving you is so easy.
Loving me must be hard….
But nothing is hard for You.
You…..God Almighty.
Patient and perfect in all Your ways

You love me
Despite of who I am
Despite what I’ve done.
I just can’t comprehend
The love You have for me.

I will be 35 in June (yuck) and I’m single. 10 years ago this would have bothered me. But as I grow closer to the Lord I have realized that I don’t need anyone BUT God.

10 years ago I was in a relationship that didn’t end well. He essentially broke up with me because of my bipolar disorder. He said he couldn’t handle it anymore. I remember looking at him and crying, “You don’t have to handle this. I have to deal with this the rest of my life. I just need you to BE there for me.”

Nope, he ran. But you know what I said? Fine. And I moved on without him. I haven’t had a relationship since.  Honestly, I have moments, small moments when I wonder if I’ll ever find someone but then I spend time with God and it all goes away. I am content being single. God fills that void.

If I’m being honest, I will say this: I am very self-conscious about my appearance. See, I have very bad dental problems due to my medications causing tooth decay. Fibromyalgia also contributes to my dental problems Half my teeth are falling out. Therefore, I don’t smile much and when I do it’s a closed mouth smile. If something makes me laugh I cover my mouth with my hand. I WILL NOT take pictures anymore because I just can’t stand to look at myself. I have to get dentures but I can’t afford them since I don’t have a job or dental insurance. (Anyone wanna start a GoFundMe page? I’m KIDDING!)

I think that’s the biggest reason why I don’t put myself out there and try to find someone.

GOD is all I need and I’m going to spend as much time with Him as I can and in the meantime, if He has someone planned for me, and I meet him, then so be it! But I’m not looking actively for anyone because I want God first in my life. Maybe I’ll be single forever, like Paul was. Maybe I’m not meant to have a significant other because it’ll be a distraction for me. And as we all know, I get distracted pretty easily. (Stupid ADD)

I will say this again: God has great plans for me….for YOU….for everyone! If only we would stop, be still and listen to His voice. He’s calling for you and for me……NOTHING can change God’s love for you. 🙂