It’s crazy how quick this coronavirus has spread and the panic it has created. I went to Walmart the other day to grab some hand sanitizer and the shelves were EMPTY! (Ironically, the soap was still there.)

Toilet paper is being hoarded. Sanitizer and even alcohol swabs are disappearing off the shelf! (My mom is diabetic and had asked me to pick up some alcohol swabs for her and there were none!)

I get it, you guys. I get the scare. No one wants to get sick. But please…calm down! I saw a news report (and if you follow me on Facebook you may have seen it) about parents picking their kids up from school and wiping down their backpack, their clothes. I even saw a parent SPRAYING HIS KID WITH DISINFECTANT! (At this point I was laughing so hard)

Listen, I’m not trying to downplay this pandemic that the virus is now being called. I’m not rebuking those who are taking this seriously! I’m taking it seriously myself. As a chronic illness sufferer, I have to be careful myself! I’m taking precautions. I’m washing my hands. I’m trying (with difficulty, LOL) not to touch my face. I’m using hand sanitizer at work after dealing with a customer at the register.

We just shouldn’t be panicking about it. Panicking just causes stress and stress can actually lower your immune system, making you susceptible to illnesses.

As Christians, we are not called to live in fear. 2 Timothy 1:7 tells us that “God has not given us a spirit of fear and timidity, but of power, love and self discipline.”

We aren’t called to have an anxious heart either.

Don’t worry about anything. Instead, pray about everything. Tell God what you need and thank Him for all He has done. Then you will experience God’s peace, which exceeds anything we can understand. His peace will guard your hearts and minds as you live in Christ Jesus.

Another bomb went off in Texas today.

What is this world coming to?

I came across a booklet I had received from the Discovery Series about finding peace in a world filled with violence and hardships.

Today, news of events around our ever-shrinking global community bombard us in an unsettling, unceasing drumbeat of violence, danger, hate, and destruction. As the stories multiply, we feel the weight of the fear and desperation.

John 14:1 tells us “Do not let your heart be troubled; believe in God, believe also in Me.”

John 16:33 says “I have told you these things so that in me you may have peace. In this world you will have trouble. But take heart! I have overcome the world!”

As long as we live in this world we are going to endure hardships. Bad things are going to take place. We live in an evil-filled world.  The Bible tells us this.

So how do we find peace in this hate-filled world?

Jesus gave his disciples a starting point for peace–trust. “He challenged them to allow their confidence in Him to overcome their fear and despair.”

Swimming in their fear, these words were a lifeboat. Words that offered rescue and safety.

His promise of peace is directly linked to our trust in Him and His ability to bring us through.

Jesus will NEVER fail us. We may fail in life but Jesus never will and we can take comfort in that. Anxiety will try to take over our thoughts but Paul tells us Philippians 4:6-7 to “be anxious for nothing but in everything by prayer and supplication with thanksgiving let your requests be known to God. And the peace of God, which surpasses ALL understanding, will guard your hearts and your minds in Christ Jesus.”

Prayer allows us to access our greatest resource–the God of the universe–who is more than sufficient for any of the trials we wrestle with.

The Prince of Peace has gone to the cross and defeated the grave to make it so.

In the words of Vivian Kretz’s classic hymn:

When I was 17, I started having panic attacks. To this day, I have no idea where they came from. Nothing significant had occurred in my life. They just showed up. Out of nowhere.

One night, as I was trying to get to sleep, I had a major panic attack. It was so bad that my hands seized into a fist, my heart was racing super fast and I literally thought I was dying. My mom tried her level best to unclench my fists but she couldn’t. It was miserable. My mom told me later that when she put her hand over my heart, it felt like a heard of horses galloping.

Mom took me to an urgent care where the doctor put me on Xanax, which made my panic attacks worse. So they switched to Klonopin. I was on that for years and for the most part, it kept my panic attacks at bay. I would still have some but they weren’t nearly as bad.

Well, eventually, I had to stop taking the Klonopin because I no longer had insurance and so I couldn’t afford it. I started going to a clinic in my city that helps those who are uninsured and they put me on Lexapro. That stopped working so my doctor put me on Celexa which I am still on. And it works wonders. I still have minor setbacks but they are nowhere NEAR as bad as that one night when I was 17.

But you know what the best medicine is? God’s Word. I find that when I’m feeling even remotely anxious, I just turn to God’s Word and look up Scripture on anxiety.

Do not be anxious about anything but in every situation by prayer and petition, with thanksgiving, present your requests to God. And the peace of God, which transcends all understanding will guard your hearts and your minds in Christ Jesus.

Some people believe that medications are not needed and that just by having enough faith is enough. I’m sorry, but I don’t believe this. When a person has a panic disorder or suffers from depression, there is a chemical imbalance taking place in the brain. In some cases, medication is a necessity, as in my case. I tried to wean myself off my medications once and it was awful.

Some more Scripture you can read if you are feeling anxious:

But seek first the kingdom of God and his righteousness, and all these things will be added to you. Therefore do not worry about tomorrow, for tomorrow will worry about itself. Each day has enough trouble of its own.
Matthew 6:33-34

For I know the plans I have for you,” declares the LORD, “plans to prosper you and not to harm you, plans to give you hope and a future.|
Jeremiah 29:11

Cast all your anxiety on him because he cares for you.
1 Peter 5:7

We live in an anxiety-driven world. But God’s Word promises us that as His children, one day we will live in a peace-filled world! One day He is coming back for us and all of life’s worries will be gone! Can I get an AMEN!

Have you ever had a panic attack? What did it feel like to you?

Jesus looked at them and said, “With man this is impossible, but with God all things are possible.”

No matter what trial you may be going through, always remember that God will be with you and through Him ALL things are possible. You WILL get through it with Him on your side. 🙂 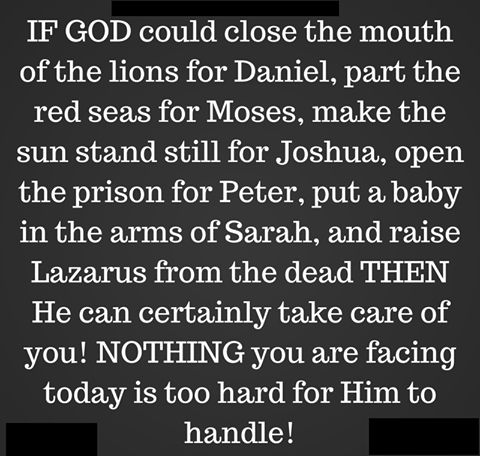 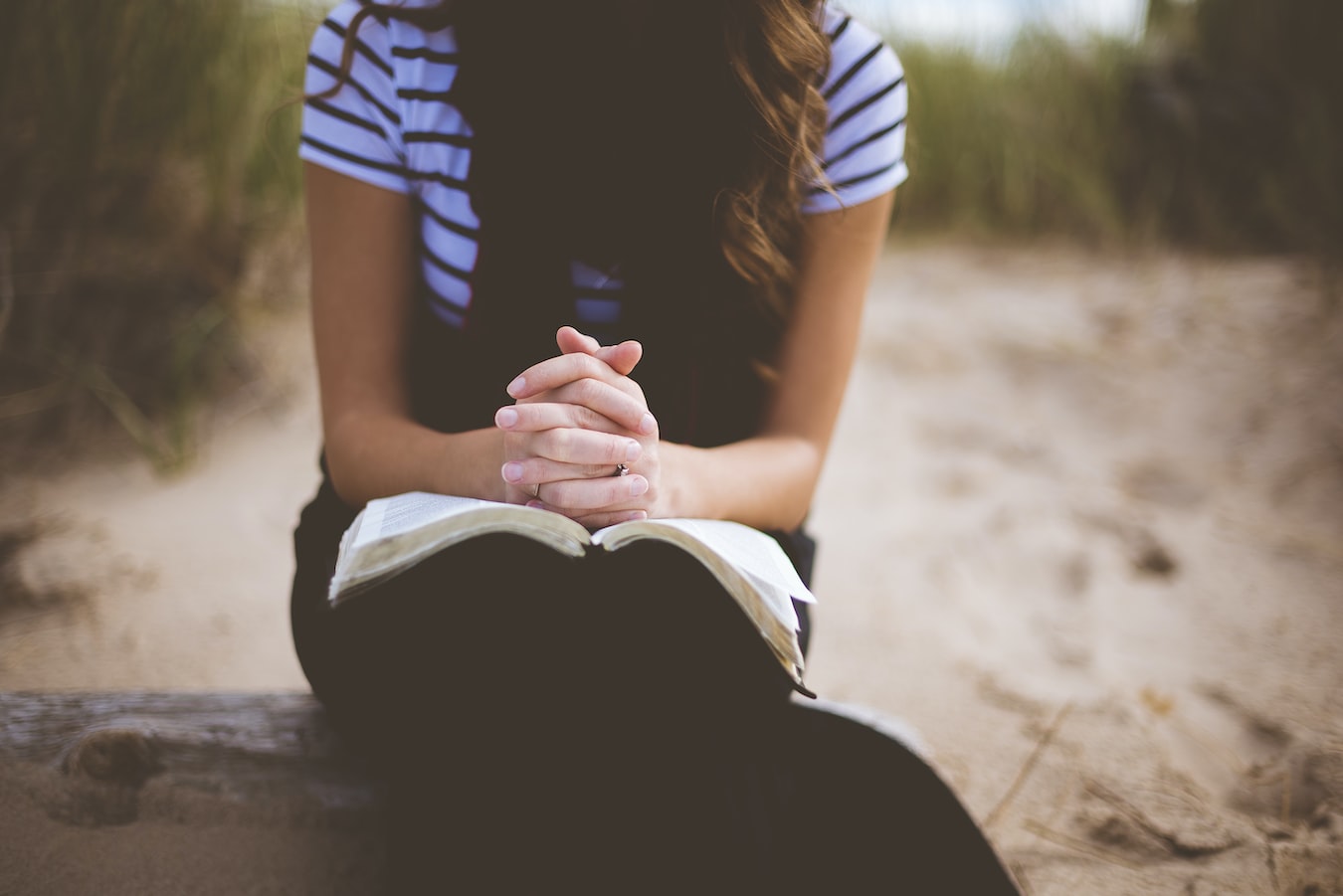 Photo by Ben White on Unsplash

Sometimes, with the hustle and bustle of life, finding time for God can be very difficult. We’re all busy with this activity and that activity. The stresses of work or school consume us.
But we must find the time to spend with God. We need to make it a priority in our lives.
Psalm 37:7 says “Be still before the Lord and wait patiently for Him.
It is in the stillness that we can hear His soft voice whispering to us, calming our anxious thoughts.
We find our rest in Him and Him alone. Psalm 62:1 tells us “truly my soul finds rest in God, my salvation comes from Him.”  Further down in the same Psalm it adds that our “hope comes from Him.“
We also are given peace when we spend time with the Lord. Isaiah 26:3 says “You will keep in perfect peace those whose minds are steadfast because they trust in You.

Philippians 4:7 And the peace of God that surpasses all understanding will guard your hearts and minds in Christ Jesus.

We cannot hear the Lord when we are so busy with our lives. We cannot afford to ignore the Lord.
Can you hear his gentle whisper?