Then Jesus said to his disciples, “Whoever wants to be my disciple must deny themselves and take up their cross and follow me. For whoever wants to save their life will lose it but whoever loses their life for me will find it. What good will it be for someone to gain the whole world yet forfeit their soul? Or what can anyone give in exchange for their soul?

If anyone comes to me and does not hate father and mother, wife and children, brothers and sisters–yes, even their own life–such a persons cannot be my disciple

HATE our parents? HATE our siblings? HATE ourselves? Did Jesus really mean that? Does Jesus really want us to HATE? Sounds contradictory, doesn’t it? Especially since one of the 10 Commandments tells us to “Honor our father and mother”

Today marks the 11 year anniversary of the Virginia Tech shootings. Among one of those killed was a young woman named Lauren McCain who was a devoted follower of Christ. She was a woman of faith. She kept the faith and ultimately lost her life. But she is now in Heaven, face to face with our Savior. She is reaping the benefits of having kept Christ #1 in her life. There is a great book written about her life called Lifting Our Eyes: Finding God’s Grace Through the Virginia Tech Tragedy I highly recommend it. 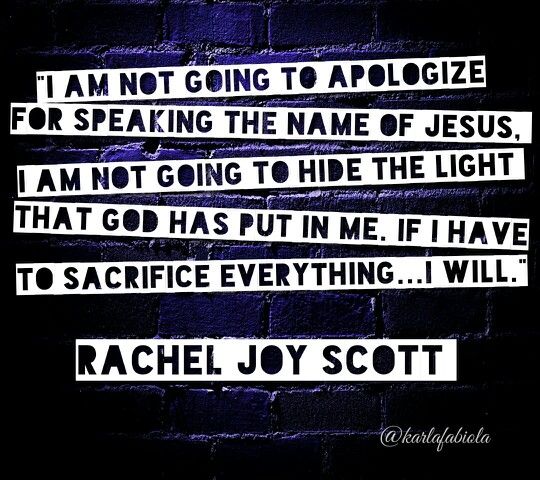 On April 20, it will mark the 19th anniversary of the Columbine shootings in 1999. There was a young girl named Rachel Scott who was the first person killed that horrific day. It’s been said that when Eric Harris approached her after having already shot her, he lifted her by her hair and asked her, “Do you still believe in God?” Rachel responded, “You know I do.” and Harris said to her “Then go be with Him.” and he shot her in the head. Rachel Scott never backed down from her faith. She remained faithful even at the point of her death.

In a booklet from the Discovery Series called Keeping the Faith: The Cost of Following Christ, we read about how following Christ will not be easy but it’s so worth it.

Jesus wasn’t asking his disciples to hate their families in the literal sense. He was challenging them to weigh the cost of discipleship and ask themselves if they were ready to make Him the Lord of their lives.

Basically, Jesus was asking this of his disciples, “How far are you willing to go to follow me? Are you ready to put me before your family? Are you prepared to give up everything you hold dear, including your life?”

Following Jesus won’t be easy. Jesus, himself, tells us this.

But in the end, it will be totally worth it when we come face to face with our Savior, who died a horrible death for us so that we might have eternal life.

Paul tells us in Philippians that “Whatever happens, conduct yourself in a manner worthy of the gospel of Christ. Then whether I come and see you or only hear about you in my absence I will know that you stand firm in the one Spirit, striving together as one for the faith of the gospel. Without being frightened in any way by those who oppose you. This is a sign to them that they will be destroyed but that you will be saved–and that by God. For it has been granted to you on behalf of Christ not only to believe in him but also to suffer for him. (Philippians 1:27-29)

“Not that I have obtained all this, or have already arrived at my goal but I press on to take hold of that for which Christ Jesus took hold of me. Brothers and sisters, I do not consider myself yet to have taken hold of it. But one thing I do: Forgetting what is behind and straining toward what is ahead. I press on toward the goal to win the prize for which God has called me heavenward in Christ Jesus.” (Philippians 3:12-14)

Are you willing to sacrifice your life for Jesus?